The Match-E-Be-Nash-She-Wish Band of Pottawatomi Indians (Gun Lake Tribe) is part of the historic Three Fires Confederacy, an alliance of the Pottawatomi (Bodewadmi), Ottawa (Odawa) and Chippewa (Ojibwe). Tribal Nations in the Great Lakes region are also known as the Neshnibek, or original people.

The Three Fires Confederacy, under the command of Chief Match-E-Be-Nash-She-Wish, signed the Treaty of Greenville in 1795 with the United States government. At the turn of the 19th century, the Chief’s Band inhabited the Kalamazoo River valley. The Band’s primary village was located at the head of the Kalamazoo River.

Chief Match-E-Be-Nash-She-Wish signed the Treaty of Chicago in 1821, which was the first land cession to the U.S. government that directly affected his Band. Under the terms of the 1821 Treaty, the Tribe retained a three-square-mile reservation located at present-day downtown Kalamazoo.

The U.S. and the Pottawatomi tribes signed the Treaty of St. Joseph in 1827. Under its terms, the Chief ceded rights to the Kalamazoo reserve granted under the 1821 treaty. Neither payment nor land was ever provided to the Chief’s Band, and instead, this began a period of constant movement north in an effort to avoid forced removal out west. The Band briefly settled in Cooper, Plainwell and Martin before finding a permanent settlement in Bradley, circa 1838, near Gun Lake.

The Bradley Settlement was first known as the Griswold Mission; an effort of the Episcopal Church under the direction of Reverend James Selkirk to Christianize the Indians. Later known as the Bradley Indian Mission, Chief Match-E-Be-Nash-She-Wish’s Band remained an Indian community and persevered as a tribal government to present times.

The political leadership of the Band since European contact is well documented. First, Match-E-Be-Nash-She-Wish followed by his son Penassee, followed by his first son Shu-be-quo-ung (a.k.a. Moses Foster), and then Moses’ brother, known by his Anglicized name; David K. (D.K.) Foster. Charles Foster was elected Chief in 1911. 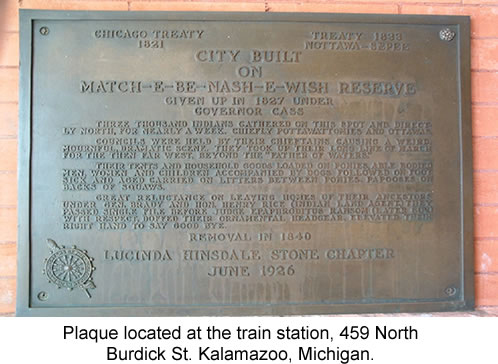 Under the leadership of Selkirk Sprague, the “Bradley Indians” attempted to organize under the 1934 Indian Reorganization Act. Before doing so, however, the Bureau of Indian Affairs decided to withhold recognition of Lower Peninsula Michigan tribes.

The Tribe’s constitution was adopted in 2000 and continues to guide the tribal government. The seven-member, popularly elected Tribal Council has authority over all affairs of the Tribe and its subsidiaries. The Tribe’s five-county service area includes Allegan, Barry, Kalamazoo, Kent and Ottawa counties.

In 2001, the Tribe began an arduous process to re-establish reservation lands to pursue economic development under the federal Indian Gaming Regulatory Act. The federal process did not conclude until 2005, when the first of several frivolous legal challenges delayed the Tribe’s gaming project for nearly four years.

In 2003, the Tribe hired Station Casinos to manage its gaming project. After years of struggle and hardship, the Tribe is on the cusp of a brighter future.

1795: Chief Match-E-Be-Nash-She-Wish signs the Treaty of Greenville on behalf of the Chippewa, Ottawa and Pottawatomi Tribes

1820: Primary village located at the head of the Kalamazoo River

1838: Chief’s Band settles near Gun Lake in Bradley, the beginning of the Bradley Indian Mission; under the protection of an Episcopalian church and later the Methodist church

1890: Moses Foster (Shau-be-quo-ung) and his brother D.K. Foster join with the Huron-Pottawatomi and Pokagon Pottawatomi groups and file claims against the United States for unpaid treaty annuities

1894: The Bradley Mission is “dissolved” by the Church; the land is divided and deeded to 19 descendants of the Chief’s Band; most land was lost due to tax liens

1904: The “Taggart Roll” is prepared by the BIA as a result of the claims filed by the Pottawatomi to distribute the awarded annuities

1939: The Bureau of Indian Affairs declines organization under the IRA of 1934

1940s: Many Gun Lake Tribe members serve in the U.S. military in WWII

1994: Petition for federal acknowledgment submitted to the Bureau of Indian Affairs